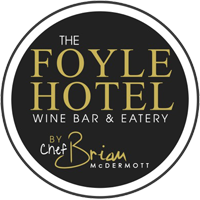 The Foyle Hotel is boutique family run Hotel, Eatery & Wine Bar by award-winning TV Chef, Author Brian Mc Dermott. Situated at the heart of the historic coastal town of Moville, Inishowen in County Donegal, you will be able to explore the beautiful Wild Atlantic Way before dinning in the eatery and wine bar of award-winning chef Brian Mc Dermott, where you will be treated to a taste of Donegal.

Originally from nearby Burt, Brian published his second cookery book, Brian McDermott’s Donegal Table, to critical and popular acclaim earlier this year. He is a firm favourite on the Irish food festival circuit and is highly sought after as a demo chef and MC at festivals from Taste of Donegal to the National Ploughing Championships. He is a regular on TV and radio throughout Ireland, including the Today Show on RTÉ 1 and BBC Radio Foyle’s Mark Patterson Show. In 2018 he was named Ulster’s Local Food Hero at the prestigious Irish Restaurant Awards.