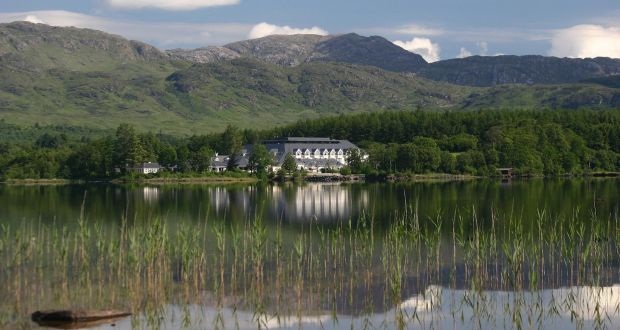 Harvey’s Point is the perfect gateway to adventure and activity breaks in Ireland. Whether you want to linger in their luxury suites, take a meandering walk along the many guided routes beside the hotel, experience a beauty treatment or just simply chill out and be pampered with fine dining and classical music in the mystical surroundings of the Blue stack mountains on the shores of Lough Eske. This Luxury 4 star hotel in Donegal has something for everyone- Anglers, Golfers , nature enthusiasts, hikers, foodies, get away from it all guru’s who want to do nothing and like nothing better than to chill out beside a turf burning fire and watch the world go by!

Food is central to the Harvey’s Point Experience.  Blessed with a magical location on the shores of Lough Eske, their restaurant is the heart and soul of the hotel.  The drama of the theatre style open kitchen is balanced by the calm waters of Lough Eske, often with swans gliding by while you dine. The Lakeside Restaurant is elegant and formal without being fussy.   The talented kitchen brigade are inspired by the finest seasonal ingredients from local and regional artisan producers. The “Cuisine Art” set menu and new tasting menu is modern and creative, yet distinctively Irish.

Harvey’s Point is considered one of the best hotels in Ireland and has won many accolades.  Last year it was named Ireland’s number one hotel in TripAdvisor’s annual Travellers’ Choice Awards for 2019.  The hotel had previously held the title for five consecutive years from 2013 to 2017, and was ranked number two in 2018.